If you’re looking for a new presentation pointer, then the likelihood is that you’re looking at getting something from Logitech. Why? Well, they’re the most popular brand on the market by quite a distance when it comes to presentation laser pointers. But which is the best Logitech Pointer for your needs? Well, let’s take a look at their most popular models that are currently available.

I should probably start by saying that Logitech themselves rank their pointers like this; R400 good, R800 better and the Logitech Spotlight is the best.

But of course, the price tag reflects this and there are many people who still prefer the R800 over the Spotlight, and even the R400 over both of them. This is for a variety of reasons, which I’ll elaborate on further in a minute.

First, I’ve made a huge comparison table to help compare the differences between the most popular Logitech pointers. 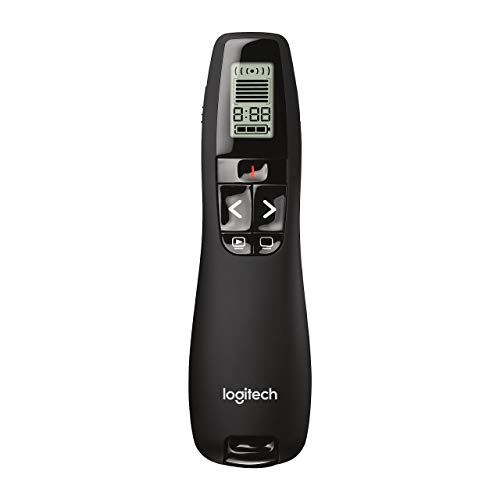 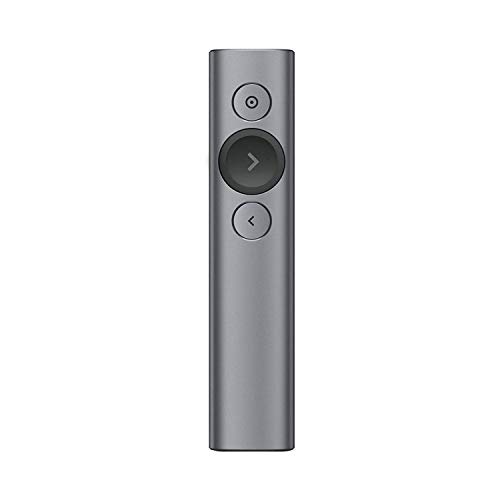 First things first, I’m going to run you through the basics and see where the differences are in terms of availability, release order, price, range and color. Then we’ll have a look at a closer comparison between the specific models.

At the time of writing, all of these presenters are currently available to purchase either through Amazon or directly through the Logitech website.

The brand however, have made the choice to opt to promote three pointers more than the other two.

The R400, R800 and the Spotlight are essentially the most popular Logitech pointers that the brand pushes, with the R700 being shelved and the R500 only being released recently.

Whilst it seems like common sense for the release of the pointers to be in accordance to their name, this isn’t the case. The R400, R700 and the R800 were all released at the same time – over 10 years ago back in 2007.

Update: Logitech have since actually discontinued the Spotlight, making it unavailable to those that are looking for a pointer without the laser element of it. Frustrating yes, and for now we’ll have to make do with the other Logitech laser pointers available.

From a price perspective, it’s clear to see that the R400 is the cheapest option – it’s a third of the price of the Spotlight. But, price isn’t everything and if you have the extra budget, you may want to opt for one of the improved models.

The R500 isn’t much more expensive than the R400, but it does have a few things extra that you might find handy – the added range and extended battery life are likely to come in handy. Whereas if the battery life doesn’t matter to you, then you could opt for the R800, which offers other features that the R400 doesn’t have.

The R700, R800 and the Spotlight all have a 100 foot range which is undeniably impressive. The R400 only has a 50 foot range, so it’s up to you to know whether you need the increased range. In my experience, the majority of people won’t need more than 50 foot range. But I have been in lecture halls that are quite large, so if you’re presenting from a certain area then a 100 foot range may be necessary.

You’d be surprised about how much the laser has an effect on your screen. The majority of people will prefer a green laser as it’s more visible, especially during the nighttime. But there are those who prefer a red laser – if that’s you, then opt for the R400 or R700. If you want green, then go for the R800.

Of course you’re probably wondering – what about the Spotlight? It doesn’t even have a laser pointer! Well, the Spotlight was designed to work with a unique system that doesn’t need a laser pointer. Instead, it uses a ‘spotlight’ to highlight where you’re pointing towards. They’ve introduced this likely due to the fact that lasers aren’t really great to use with high definition screens, of which the Spotlight is more compatible with.

Some people prefer to have a laser, some don’t – the decision to remove the laser pointer will likely determine whether the Spotlight is for you or not.

Now, I’m going to look at each of the pointers in a direct comparison with each other. I’ll start with the R400, as this is the basic Logitech model that is used to compare it to other options.

The R400 was released over 10 years ago and has been Logitech’s most simplistic pointer ever since. In 2018, they took the chance to release the R500 – likely after many people didn’t want the new Spotlight, they just wanted an updated version of the R400.

And that’s pretty much what the R500 is. It’s very similar to the R400 in a lot of ways, but there are some additions that you might find useful.

I’m going to continue to use the R400 as the basis for the comparisons, as it’s the most basic model. The R800 is as similar to the R400 as the R500, but it has some different additions that the R500 does not have.

However, you shouldn’t underestimate the difference of a laser color pointer. Most people will prefer to use a green laser, as this is more easily visible for the majority of people.

The Logitech R Series vs the Spotlight

Overall, I would personally probably opt for the R500 because I do not need all of the added features that the Spotlight introduces. Usually the most recent product performs best, and I believe that’s the case with the R500 too. But if you want some more features included with your device, then you could opt for the Spotlight. Of course if you’re on a budget, opt for the R400! If you don’t want a Logitech pointer, then there are other presentation pointer brands on the market that you can find at a cheaper price.