If you’re using a Newtonian telescope, then you’ll likely want to think about picking up a collimator too. Now, depending on your experience, you’ll either know exactly what you’re looking for, or you might need a little guidance. If you’re new to astronomy, then you might be better off opting for a different kind of collimation tool.

And honestly, don’t worry if you’re not a telescope expert – I’ll try and give you a few tips to help you through the process. Generally, laser collimators aren’t really designed with beginners in mind, and the instructions can be extremely confusing. It doesn’t matter on the price of your telescope either – even if you’re on a budget and have the best telescope under $200, you’ll still be able to play around with the collimation.

So, it’s worth having a browse online first to gather as much information as you can about laser collimators before you buy anything. So, let’s take a look at the best collimators, then I’ll give you a run down of how to use one, and whether it’s even worth picking one up at all.

It’s worth noting that before you even begin thinking about getting a laser collimator or a cheshire, you should perform a star test with your telescope. This will allow you to know easily whether your telescope needs collimating or not.

It’s quite simple, and it’s 100% something you’ll want to do before collimating your telescope (if it even needs it!). You can do with any telescope, whether it’s an expensive model or something more reasonably priced.

Is a laser collimator the right choice?

In my eyes (and many of my astronomer friends eyes too), a laser collimator is probably not the best choice, especially not for beginners. The issue comes with cheap laser collimators, because many of them are not collimated properly themselves.

So, unless you’re willing to spend a little more on a decent quality laser collimator, or learn how to adjust your laser collimator yourself, then for most people I’d recommend getting a Cheshire eyepiece. Let me run through what I’d opt for, and why. 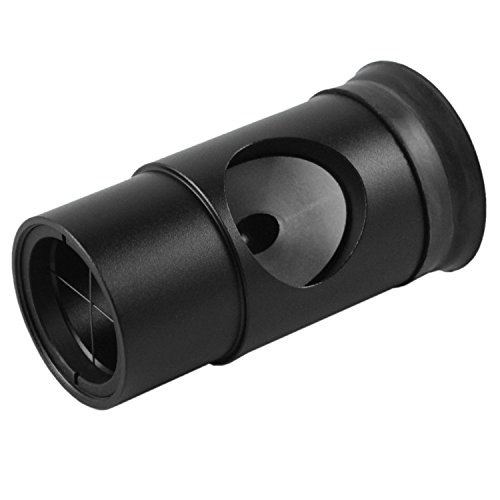 For those on a tight budget and wanting something cheap, then your best bet is to pick up a cheap Cheshire collimator like this one. You can usually find them for around $20, so you don’t need to worry about spending a ton of money on them if you don’t have it.

You don’t need anything too expensive, and they’re very easy to use, which is why I’d recommend them for beginners. A Cheshire eyepiece will also easily allow you to set the secondary too, which is extremely important.

Another advantage that you might not think about is that a Cheshire eyepiece doesn’t use any batteries. This makes it quite simple and easy to use, which is exactly what we want. So, in my eyes, for beginners a cheap Cheshire is your best bet.

If you do go ahead an pick up a Cheshire, then I’d advise that you read this guide from Astrobaby. Its your best bet if you want to learn how to easily collimate your telescope with a Cheshire.

What about Laser Collimators?

As you can see from the video, you need to be a bit ‘hands on’ to be able to do this properly. So, that’s why I’d avoid this, especially if you’re a beginner.

Generally, some people will say Hotech Collimators are overrated. Personally, I wouldn’t even think about opting for a cheap collimator after getting a Hotech. If you want a quality laser collimator, then this is my number 1 choice.

Hotechs are pretty well known amongst astronomers as some of the best laser collimators available. They’re definitely a little expensive, but you get your moneys worth with a Hotech.

The good thing about this Hotech is that it’s an SCA collimator – SCA stands for self centering adapter. If you want a guide on how to use this collimator properly, then here’s the best one that’s currently online;

Another one of the main benefits of a laser collimator is obviously that you can do it in the nighttime, which means you don’t need to do it in advance. With Cheshires or if you’re trying to collimate without a tool, you’ll have to do things completely in advance – which can be a bit of a nightmare.

So, are laser collimators worth it?

In my opinion, laser collimators are worth it if you’re going to invest in getting a half decent one, and if you’re not a beginner or a novice in astronomy. You need a decent quality laser collimator for it to be effective, otherwise you’re just going to be wasting your cash. You also need to know how to use a laser collimator properly, which the majority of beginners will not.

So for beginners, I’d definitely advice using a Cheshire eyepiece to collimate your telescope as opposed to laying out the cash on a laser collimator. But, this is only my personal opinion and you’re free to do whatever you think is best.

All in all, both Cheshire eyepieces and laser collimators are useful in their own way, although they both have the same objective. As well as getting a collimator for your telescope, you also might want to look at getting other accessories – typically the first thing that many people buy when looking to step their astronomy game up is a good Barlow lens.

With the right equipment, you’ll be able to ensure that you’re getting to most out of your telescope, and collimation is a huge part of that for reflectors. The best laser collimator is going to be able to do exactly what its name implies; it is going to best help a user best collimate his or her laser.

One of the biggest problems with any collimator on the market is that they can only do one thing, best collimate. A good laser collimator should be able to best collimate everything from small pointers like the Wicked Ridge and Cabela’s models to large lasers such as those used in high-powered rangefinders and survey equipment.