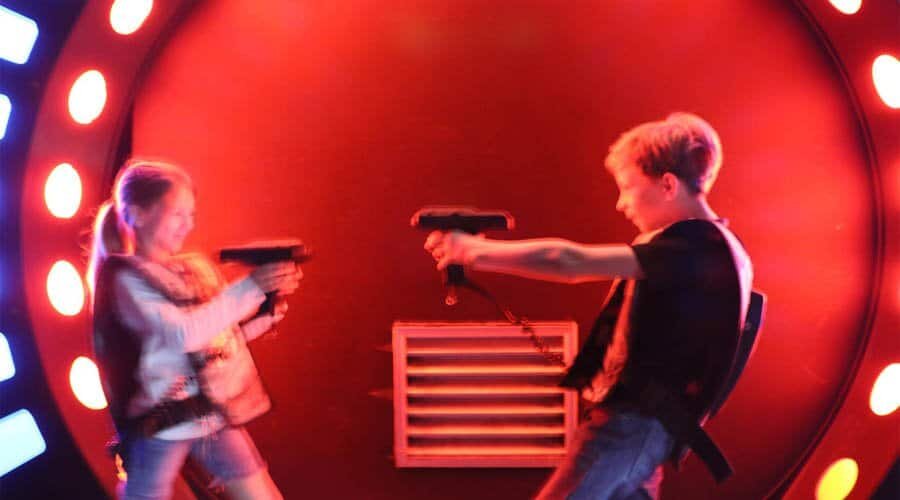 Not everyone wants to play fair. If you’re continuously getting beat at laser tag, then you may want to consider cheating. Obviously, not all of these methods are technically cheating – some of them are just bending the rules a little bit.

If you’re playing laser tag with your friends and you want to get the unfair advantage over them, here are some of the best ways that you can do this to try and get an easy win.

Get up close and personal

The majority of laser tag sets are relatively accurate from long distances. But, they undoubtedly lose some of their accuracy when you get up close and personal. If you’re within a really close proximity from your opponent, then you can fire pretty much anywhere and you’re almost guaranteed a hit on your opponent.

This isn’t always the best strategy, but it’s definitely a good idea if you’re particularly bad at aiming. If you get up extremely close to your opponent, then the majority of time you’re going to hit your opponent – even if you’re not 100% accurate with your shots.

Running around like a chicken with your head cut off trying to shoot everyone definitely isn’t the best way to play laser tag. You need to be cautious and clever when you’re playing laser tag and you can’t go in all guns blazing.

Now, I’m not a massive advocate for camping usually – but it’s definitely a good way to pick up some easy points. It’s especially good if you’re playing with rookies, who likely are running around like chickens with their heads cut off. Camping is the method of hiding in one specific position and letting your opponents come to you. It generally is used in computer games, but it’s also a good method to pick up easy points in laser tag too.

By covering up the sensors on your own equipment, you make it much harder for your opponents to take your lives. This is a pretty extreme method of cheating, so only do this if you’re really intent on cheating!

Cover your own laser

Although it might seem counterproductive, you can actually cover up your own laser and it won’t effect the power of your laser tag gun. Why would you do this? Well, a laser doesn’t actually need to be visible when it’s firing to be effective.

But when you’re using your gun, the likelihood is that your enemies can easily see your gun and therefore, see your position. This effectively makes you sitting duck, and your opponents will easily be able to pick out your position and take you down. You can easily use a little bit of tape to cover up the laser on your gun, or you can find some thin tacky and layer it over to hide your guns laser.

If you’re playing with an older laser tag set, then the likelihood is that set will have been used multiple times. As with the majority of toys, over time they undoubtedly get less responsive and the power of the lasers decreases.

If you’re looking to get a sneaky advantage over the people that you’re playing against, then you definitely need to try and get the newest laser tag gun that you can. A general rule of thumb is that the newer the gun is, the more powerful the laser is – which effectively can give you a little advantage over your competitors.

Although not really cheating, you undoubtedly want to dress in all black if you’re going to play laser tag. As most laser tag games are played in the dark, you’ll be surprised at how bright your regular clothes will show up in the dark. If you don’t have black clothes, then at least try and wear dark clothes to keep yourself hidden from your opponents.

Of course, this isn’t always the case and sometimes you’re going to want to be more selective with your shooting so that you can evade your opponents and not give your position away.

There are many different ways you can cheat at laser tag, from simple techniques you can do with stuff you find lying around, to using expensive high tech equipment. How much money/effort you want to put into it is entirely up to you.

3 thoughts on “How to Cheat at Laser Tag! | My Tops Tips”