For some gamers, it’s a cardinal sin to use a wireless connection. Although Wi-Fi connection has improved greatly over the years, it’s still looked down upon by many.

However, with consoles like the Nintendo Switch making the console intentionally for wireless play, it seems like Wi-Fi might be becoming the more popular option. Brands like Alienware and MSI are releasing laptops with increased connectivity too.

Ethernet vs Wi-Fi for Gaming, Streaming and Everything Else

Is there really a dramatic difference between an ethernet connection and a Wi-Fi connection, or has tech advanced enough that the connection times are relatively similar now?

If you’re trying to decide between ethernet or Wi-Fi, then it’s a fairly easy decision to make.

Although Wi-Fi connection has improved, it’s still preferable to use an ethernet cable. This is especially true for gaming and desktop use, as a wired connection will give you more reliability and less lag as a result.

However, many people play over a Wi-Fi connection with no issues, so don’t worry if you don’t have the choice – you can still get a solid internet connection over your Wi-Fi network.

Wireless network connections are getting better and better nowadays, so you can still get a reliable connection without having to use ethernet.

But for now, an ethernet will typically give you a better connection between your gaming console and your monitor or television; and there’s a few reasons why this is the case.

Why is ethernet better? – Wired and wireless connections

The main issue for Wi-Fi is completely down to one thing – the atmosphere surrounding it.

Although in the past Wi-Fi connections could only reach 50 mb/s, nowadays the potential Wi-Fi speed is so good that the connection is as good as ethernet – however, this isn’t actually the reality.

Whilst Wi-Fi can maintain speeds as fast as an ethernet connection, this isn’t often the case due to the interference between the router and your device.

You’ll notice this even now, just by walking around your home. The difference in the quality of signal can be quite dramatic even as you’re walking around your house and distancing yourself from your router. This is understandable as the distance and potential objects in between interfere with the radio waves.

Another key thing to think about when you’re considering the battle between ethernet and Wi-Fi is the privacy issue. With ethernet, you don’t need to worry about your data being compromised as a connection can only be made by the device that you’re using.

However, with a Wi-Fi connection you essentially have an open network, which makes your device much more susceptible to hackers. Depending on the type of Wi-Fi connection that you’re using, you’ll get varying degrees of security.

As well as the security of your data and the possible interruptions in your connection, another thing to consider is the latency. You’ve probably heard gamers talk about ‘lagging’, which refers to a delay between your actions – e.g. your controller, mouse or keyboard – and the resulting effect.

This is another thing that makes an ethernet connection a better choice than using Wi-Fi. Ethernet cables are pretty cheap too, so there’s no reason not to pick one up.

So, when is Wi-Fi a good choice?

Hey, I’m not a Wi-Fi hater by any means, and it’s an amazing part of new technology. Wi-Fi has its place in society, primarily due to its convenience and ease of use. You can easily connect to Wi-Fi no matter where you are, which makes it great for its simplicity.

If you imagine having to connect your mobile phone through a wire every time you go to a restaurant, this sums up the importance of Wi-Fi very easily. However, bear in mind that a wireless connection will always have a worse connection than a wired ethernet connection.

What about for streaming?

The only time that you’re really going to be bothered about a Wi-Fi connection is when you’re gaming, and you need as low latency as you can possibly get. This is where a wired connection speed can give you a slightly better gaming experience by giving you the competitive edge over other players.

For streaming, a Wi-Fi connection should work perfectly well, and it’s much less of an issue. This is definitely the case with modern wireless connections, which are much better than in the past.

Though you may get a slightly slower speed, you’re generally sacrificing a few seconds of latency in favor of making your setup cable-free. Most gamers will be fine with this, as Wi-Fi standard as extremely high nowadays and they can provide solid internet speed.

However, many gamers do still prefer ethernet connections as opposed to wireless ones, especially if you’re going to be using multiple devices on the same network. If you want the absolute fastest network speeds, then connecting to an ethernet port may actually be the right thing for you to do.

Though the significant advantages you’d have gotten from opting for a wired internet connection over a wireless one aren’t as great as they once were, they are still worth considering. 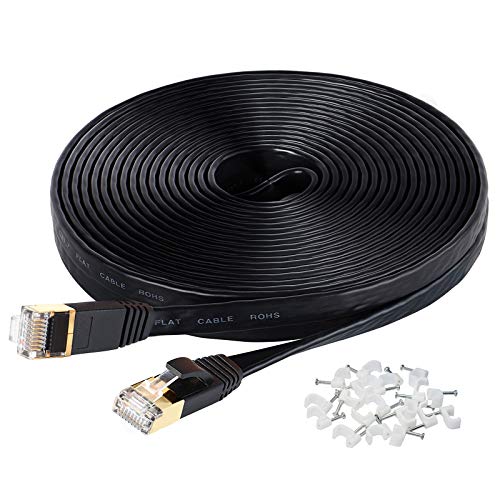 A lot of people will tell you that a Cat 7 is overkill for gaming, and it probably is. Generally, you’ll only need a category 6 cable to get a decent quality of gaming without interruption.

But, some people want peace of mind and you get that with a cat 7 – they transmit data 10x faster than a cat 6 cable, so they might prove to be a better option. If you want a truly flawless connection, then it’s worth looking at a model like this one.

Another reason why I like this design in comparison to some others is that the cable is designed to be flat. This means that it’s very easy to thread it under or over door frames without any obstruction, and leaves the cable less exposed to damage.

The one drawback of using ethernet is that fact that it’s a physical wire, which can be a little annoying. So, it makes sense to opt for something that can be easily concealed.

If you want the cheapest possible Cat 7 ethernet cable, then this is probably going to be your best choice. It has an awesome connection at a cheap price. 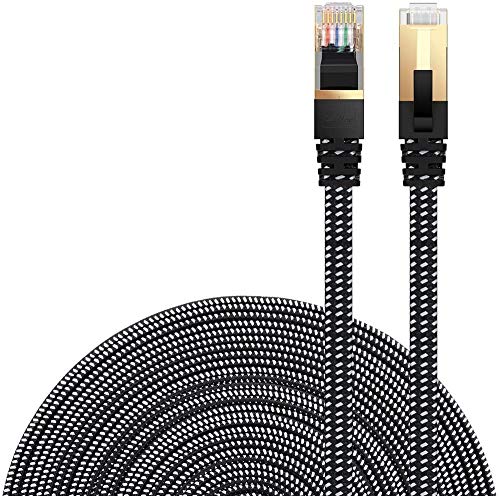 If you’re not planning to attach the cable to the wall in some way and you just need a short connection, then it’s worth looking at getting something cheaper and smaller. This Nylon braided cable would make an awesome choice for those looking for something cheap and easy to use.

Nylon braided cables are a great way to ensure that you’re not going to damage the cable itself. Often with cheaply made cables or even regular cables, they can become easily damaged and frayed. This is just from general wear and tear, and it will happen to the majority of cables over a long period of time.

However, if you opt for a Nylon braided cable, then you’re less likely to experience any sort of fraying or damage. So, going for this DanYee Nylon braided ethernet might be a good idea if you’re looking for something that’s going to last you a good while.

If you’re trying to find the cheapest cable available, then you can consider looking at getting an Amazon Basics cable. Generally, whilst they might lack a little in quality, they do provide a really good low cost option that’s still decent enough to get the job done.

As I’ve already mentioned, you only generally need a Cat 6 ethernet cable for gaming, and a Cat 7 is usually unnecessary.

This one will still transmit data at speeds of up to 1000 mbps, which is definitely fast enough for pretty much any gaming system out there. The cable itself is fairly basic and it’s only 5 foot long, so bear this in mind before you purchase.

As with pretty much all Amazon Basics stuff, you get a limited 1 year warranty. But when it’s this kind of cheap price, that’s all you can really expect. If you want the cheapest option out there, this is definitely the top choice. 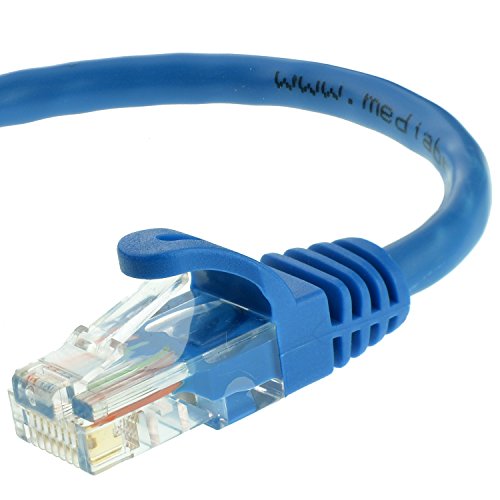 If you have the need for a longer ethernet cable that you can use for gaming, then it’s worth looking at this one made by MediaBridge.

This one is 15 feet long, making it 3x the length of the cheap Amazon Basics option. This comes in handy if you want to run it under your carpet across the room.

MediaBridge are pretty well known as a brand for making some of the best options for tech stuff when you’re on a budget, with this ethernet cable being a good example of that.

What to Consider Before Buying an Ethernet Cable

Do you need an ethernet cable for gaming?

You most definitely do not need an internet cable for gaming. However, for serious gaming, an ethernet cable is currently a necessity to ensure that you have a solid connection. So, if you want the best gaming experience, then you’ll definitely want to invest in an ethernet cable to use whilst you’re gaming.

Will an ethernet cable make my internet faster?

An ethernet cable doesn’t work by making your internet faster. Instead, it works generally by reducing the amount of interference between your console and your internet. If you’re using a wireless connection, then this interference can make a big difference in your gameplay, and can cause your game to glitch.

Are ethernet cables all the same?

Another common question about ethernet cables is whether they’re all the same. And the simple answer is really that no, they’re not. Ethernet cables are generally quite different to each other, mainly due to their limitations. Although the design of an ethernet cable will pretty much stay the same, each category of cable will have a different capability on it’s ability to transmit data, which is where the real difference comes in.

Do ethernet cables make it slower for those using Wi-Fi?

A pretty common misconception is that if you use an ethernet cable for your gaming, then it’s going to slow the Wi-Fi in the house down for everyone else. This definitely isn’t the case, as your router will have the same bandwidth to share, whether this be via ethernet cable or via Wi-Fi. So, your gaming may slow down the Wi-Fi for others, but no more than if you was also using the Wi-Fi. Check out Lifewire if you want to understand a little more on how ethernet cables work – ethernet wins when it comes to the fastest connection, but it shouldn’t make all of the mobiles devices in your home slower.

So whilst Wi-Fi is great, for the best connection you’re still going to have to opt for an ethernet connection. For gamers, an ethernet cable is pretty much an essential if you’re taking things seriously. However, if you’re a little more relaxed about it, then a Wi-Fi connection will prove to be perfectly fine for gaming as well.

For everything else, a Wi-Fi connection is perfectly fine to use as your main connection at home. Of course, you’ll get people that say Wi-Fi is bad because it can apparently cause cancer, but there’s little research to support such theories.

So in conclusion, if you want a great connection opt for Wi-Fi, if you need a perfect connection then an ethernet is the better choice.