If you think about astronomy, you automatically think of using a telescope. It’s no surprise, seeing as telescopes give an awesome view of the sky and there’s an abundance of different types of telescope that you can choose from. But is a telescope always the right option, or for some people are astronomy binoculars a better idea?

Of course, there are advantages of using binoculars that you just can’t get when you use a telescope. So, let’s have a look at some of the reasons why you might want to consider using a set of binoculars for your astronomy needs.

If you’re just getting into astronomy, then it makes sense to get a good pair of budget binoculars. Those there’s no real ‘best set’, there are a few different ones that I’d recommend if you’re just dipping your toes in the water. 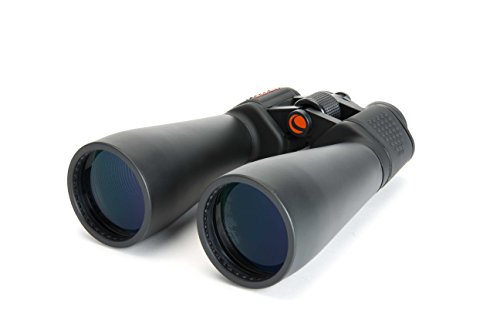 Celestron are generally considered to be one of the best brands for beginners in the industry. The main reasons for this is that they have the widest variety of products, so it doesn’t matter whether you’re a novice or an expert – they’re going to have something for you.

For complete beginners, you’re likely best going for the 15×70 set, as these are best for viewing simple things like the moon. You won’t need to get a tripod with binoculars with this lower magnification either, but they’ll be more than enough to see the moon and close planets.

The main reason that I like the Skymaster’s is that firstly, they’re available at a really good entry price. If you put them with another cheap telescope, then you can get a good combination of telescope and binoculars for around $250, which is pretty affordable.

Another reason that I like the Skymaster’s is that they’re pretty much the maximum you can use without having to use a tripod. They’ll give you a pretty steady view of the sky, but if you opt for 20-25x magnification you’re entering tripod territory in my opinion.

Finally, whilst the Celestron’s aren’t the very best quality that you’re going to find, they’re surprisingly good. If you’re looking to see the moon clearly, you should be able to with the Skymaster’s. 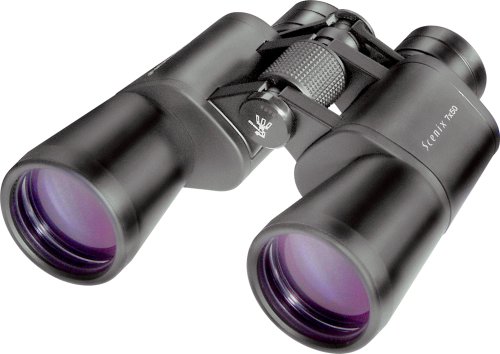 Another option if you are looking for a cheaper set of astronomy binoculars is the Orion Scenix 7×50. They’re ideal if you want a set of smaller binoculars that still have enough power to see star clusters and get in depth looks at a full moon. But if you want binoculars that you can use for astronomy and for other stuff too, then the Scenix 7×50’s are probably your best bet. Due to their compact size, they’re great for birding and other outdoors activities, too.

Orion Scenix 7×50 have adjusted focussing wheel, which rotates 360 degrees around the eyepiece and has a rubber coating – it feels nice in hand because of that. Orion Scenix 7×50 is bigger, heavier and bulkier binocular with wide field of view – it makes easier to track your targets after locating them with Orion Scenix 7×50.

One thing to note about the Scenix is that they use Bak4 prisms, like the majority of decent quality astronomy binoculars currently available. Essentially, Bak4 just refers to the optical quality of the materials (glass) used (typically, Bak4 is better than the other common glass used, BK-7). Bak4 binoculars use non circular exit pupils too, which helps to reduce blur around the edges of your view.

For their relatively cheap price, the Orion Scenix provide decent value. They’re made from decent material (not cheap plastic like you might expect with cheap binoculars), they have multi coated lenses and they’re some of the best value binoculars you’re going to find on the current market. 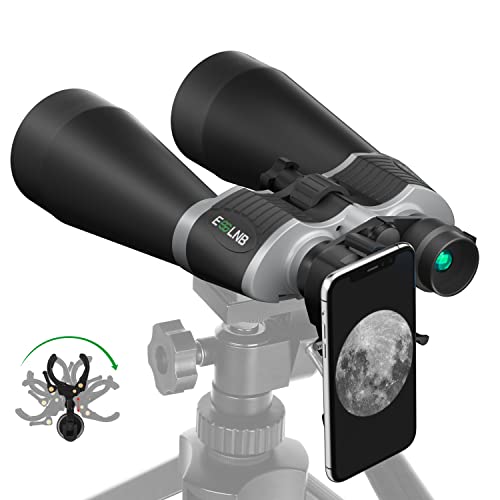 Another option for those that want a set of big binoculars is this ESSLNB set. Though they aren’t a prestigious astronomical brand, they’re typically pretty cheap and they do a decent enough job.

What are some good things about this particular set of binoculars? Well, they come with a decent quality set of adaptors, for both using with a tripod or directly onto your smartphone. This means that if you’ve thought about getting started with iPhone astrophotography before but don’t want to splash out on all the equipment, you can get a taste for it with just this set of binoculars and a phone.

As well as being easy to set up with your iPhone, this set is ideal for those that wear glasses and need a set of binoculars with long eye relief. Essentially, eye relief is just the distance allowed between the eyepiece and your eyes, and binoculars with shorter eye relief won’t give a comfortable view for those with glasses. So if you’re looking to scan the sky for long periods of time and you wear glasses, it’s essential you get a set that allows this. So, if you’re not too concerned about having high magnification, then this is likely going to be a good set of binoculars for you. 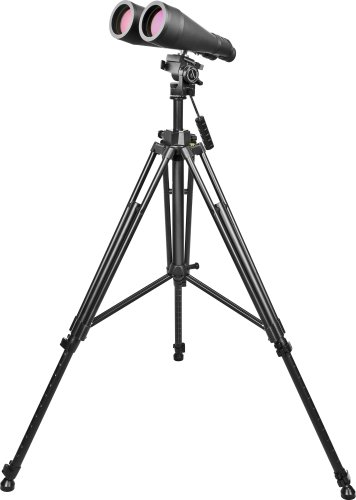 Aside from Celestron, the other most well known brand when considering astronomy equipment is probably Orion. They make some awesome telescopes, as well as a variety of astronomy binoculars too. One of their more popular models is the Orion 20×80’s.

As I’ve mentioned, when you’re increasing the magnification to 20x, you’re entering tripod territory. That isn’t necessarily a bad thing, except that tripods can be expensive and cheaper binoculars tend to have a problem attaching to tripods (for me, anyway). So if you’re looking for a binocular and tripod set together, then it could be worth considering the Orion 20×80 Astronomical Binoculars.

Although they’re a bit more expensive than the other binoculars, it’s necessary to take the tripod into account. Not just this, but the quality of the binoculars themselves. The 80mm objective lenses are great, and are all you really need to get a good view. If you’re looking to take a step up from the cheaper sets of binoculars, then getting this set of 20x80s is undoubtedly a good idea. 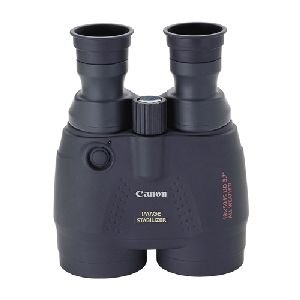 If you have more cash to spend, then you could consider getting some image stabilization binoculars. Of course, these aren’t necessarily for a beginner and are only for people looking at getting themselves an extravagant purchase.

Many people don’t think image stabilization binoculars are worth considering, and I’ve debated IS binoculars myself before, and ultimately decided that they can be a good investment. Essentially, image stabilization is designed to help reduce the effectiveness of your shaky hands. This reduces the needs for a tripod, and allows you to use higher magnified binoculars.

Astronomy Binoculars – Better than a telescope?

Overall, it’s pretty clear to see where binoculars have their advantage over telescopes. They’re much easier to carry around with you, and you’re going to get a quicker and wider view of the sky – though nowhere near as in depth.

What can you see with astronomy binoculars?

If you’re completely new to astronomy, then you’ll want to know exactly what it is that you can see with a good set of astronomy binoculars. Your vision isn’t going to be as good as with a telescope, but that doesn’t mean you aren’t going to get a clear view of closer objects.

It’s clear to see that with binoculars, you’re going to be able to see pretty much everything. But, you need to ensure that you’re using the binoculars properly, you really need to understand how astronomy binoculars work.

Before you purchase a set of astronomy binoculars, you’ll really want to understand how they work and what the specifications mean. One of the most confusing things about binoculars can be their name, as they’re often referred to by their specifications e.g. Celestron 10×50 binoculars. But what does 10×50 even mean, and does it matter when you’re picking which set your should purchase?

Well yes, it does matter a lot actually. These numbers refer to the main two things that you’ll want to consider when you’re purchasing a set of astronomy binoculars; magnification and objective lens size.

Whilst you might think it’s better to just go and get the highest magnification possible, this isn’t the case. Unless you have a tripod to keep your binoculars steady, then you’ll need to ensure that they have a low enough magnification, otherwise they’re just not going to be stable enough to see anything clearly.

The other thing that you’ll want to consider is the objective lens – the second part of the 10×50 specifications. This defines the brightness of the image that you’re going to see, so if you want a brighter image, then you need larger objective lenses. They are brighter because they have the ability to draw in more light.

To help people know what kind of binoculars they need, I’ve created this buying guide filled with the most common questions that I’m asked by friends and family before buying astronomy binoculars. If there’s something I’ve missed that you’d like to ask me, you’re more than welcome to at the bottom and I’ll try and give you an answer as soon as I can.

Do I need a Tripod?

If you get higher magnification binoculars, then you’ll want to consider getting a tripod along with your binoculars. This is because they need to be steady to be able to get a clear view. Trust me, even if you think you’ve got a steady hand, if you’re using 25x magnified binoculars then you’ll want to get a tripod to go with them. You should also ensure that you have the right tripod fitting, or you might need to get a binocular tripod adapter.

How much should I spend on astronomy binoculars?

If you’re purchasing your first set of astronomy binoculars, then there’s really no need for you to spend for than $200. That doesn’t mean that you even need to spend $200, as there are definitely other options that are cheaper for you than you can get your hands on, too.

Will I need to get waterproof binoculars?

Of course, this depends on where you’re going to be stargazing. Generally, rain isn’t the best time to be stargazing, so it doesn’t really matter whether your binoculars are waterproof or not, as long as you have a good waterproof harness or case.

Porro prisms were actually the standard for all binoculars until, much like John Dobson popularised the Dobsonian telescope, companies Zeiss and Leitz introduced Roof Prism binoculars. The difference between the two is that Roof’s were introduced as a better, smaller version of Porro prisms. Whilst Porro prisms reflect directly off of each other, Roof prisms are designed in a different way that makes them better for weatherproof and more compact.

Overall, these are just some of the questions that you should be asking yourself when you’re considering getting a new set of astronomy binoculars. Whilst you might want to consider a telescope for more in depth views of the sky and stars, this isn’t always necessary and sometimes for complete beginners, spending the first few months using a set of binoculars can be a great idea.

Remember not to break the bank on a set of binoculars, as there’s a variety of other equipment that you’ll need to consider getting as well as the binoculars themselves; tripods, cases etc. As far as astronomy goes, telescopes will always take the number 1 spot – with binoculars being a close second.